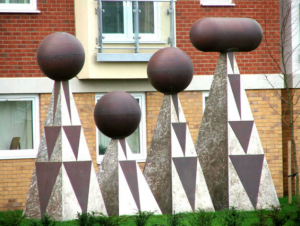 The Winterthur Way development, known locally as Victory Hill, was completed in 2006.

The sculpture was installed around Christmas 2005 during a flurry of snow when the development at Winterthur Way was nearing completion. The development and sculpture take their name from a nearby pub The Victory that was demolished during the sixties when Basingstoke became the capital town of roundabouts.

The four piece installation, designed & built by sculptor Richard Farrington, comprises sanded stainless steel pyramids of various heights that are decorated with triangular copper sheet echoing the roofs of the buildings. At their apex are three 800mm diameter copper spheres and one lozenge that make up the Dot/Dot/Dot/Dash of the installation. The sculpture is visible both from the access road to the residential units and the railway line that creates a direct link between Basingstoke and London.